The birdsong is louder 14 metres up and there’s a citrusy tang of pine in the air. Scrambling to the top of a conifer with a six-year-old who suffers from vertigo wasn’t top of my post-lockdown bucket list, but after staring at the same four walls for weeks on end, there’s a welcome sense of perspective to spending time in a forest of 7,000 trees.

This is Wow Park in Billund, the Danish town that’s the home of Lego HQ, and that calls itself the “Capital of Children” – with ambitions to become the most child-friendly place in the world to live and work. Billund’s newest attraction is a treetop wonderland, the largest of its kind in the country, including suspension bridges, nets in the sky, giant bouncy balls, swings and ziplines; all crafted around the trunks of giant trees. It’s like Go Ape gone Viking, with a rough and ready, hand-whittled feel.

Wow Park’s founders, brothers Jacob and Aage Hindhede grew up on a farm in western Jutland, playing outdoors and swinging in trees. Becoming parents, they wanted to recreate this bucolic idyll – but their children were more interested in their tablets than in trees. 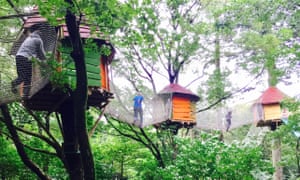 “We knew it was really good for kids to be in nature and to get them off their screens,” says Jacob. “You can just feel it in your stomach: that outdoor magic – and we wanted that for our kids.”

So, he and his brother created a small park in Skjern, west Denmark, that has attracted more than 40,000 visitors a year. Inspired to expand, the Hindhedes set up a second park, three times the size, in Billund, with the goal of replacing screen time with outdoor family time. Another guiding principle is that “nature was here first”.

“Our ambition is for the park to absorb more carbon than it emits and all our experiences are gravity-powered, with little need for electricity,” says Jacob. They don’t use pesticides, weeding by hand and waging a constant battle against the undergrowth, while preserving meadowland and pond habitats for flowers, insects, salamanders, tadpoles and butterflies.

It’s all very worthy, but I can’t help wondering whether we shouldn’t just “play in a forest” to get back to nature, rather than paying to go to a park. Is this just a ploy to commoditise nature?

“No,” says Jacob, firmly “because we’re all busy these days and we can see that many kids don’t get the opportunity to play like this in nature. Most parents aren’t building treehouses and rope swings.”

This much is true. My husband is pretty handy and we spend a fair amount of time outdoors, but building treehouses? Not so much.

“Just try it,” Jacob urges, nodding towards the first treehouse, so high that my son and I have to squint to make it out: “See for yourself!” 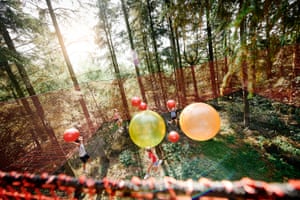 Climbing a vertical tunnel is surprisingly challenging (for me; my six year old is fine). There are no harnesses, unlike at Go Ape, and aside from the hand sanitiser at the bottom of every net or ladder, we feel utterly lost in nature. There’s a freedom to romping about, unaided, unsupervised, without any of the queuing that normally accompanies kids’ attractions. It’s liberating, and after a while my son stops asking: “Are we allowed to do this?” because the answer is alwaysyes. I realise I don’t’ get to say yes to my kids as often as I’d like to in our risk-averse world.

Balance and bravery are put to the test as we run, climb, fall and get up again. My son somehow forgets his previous fear of heights and soars across woodland on giant Tarzan swings before bouncing on high-hanging suspension bridges.

Once we’ve worked up an appetite, there’s reasonably healthy food on offer at the reasonably priced (for Denmark) food court. Unusually, visitors are actively encouraged to bring their own food: either ready-to-eat or ready-to-grill on one of the campfire sites, where firewood is provided. So, while you can buy marshmallows at 20 krone (around £2.40) per 100g from the park shop, you can also bring your own to toast on the campfire, sitting on a felled tree trunk, wrapped in a rag-roll rug, laid on for extra cosiness or hygge. My cynicism begins to melt at the same rate as the Rocky Road ice-cream I buy (for sustenance) before we sally forth for round two.

A word to the wise: dress for mess in comfortable clothes and appropriate footwear. Trousers are helpful for crawling along the ground and sliding down 40-metre toboggan chutes. And be prepared for a workout. The park is open to everyone but the target age group is 4-12s. Visitors can go at their own pace, but my pace is dictated by a six-year-old high on Rocky Road and “freedom”. By the end of the afternoon, I have a saucer-size bruise on my thigh, mild whiplash and an injury sustained from a ricocheting rope (equivalent to a kick in the nuts … you get the idea). I’m a husk. But I’m smiling.

Driving home to Velje, about 30km east of Billund, I reflect that although we could all just spend more time in forests, doing so in a hand-whittled wooden aeroplane on a zipline and trampolining in the clouds is a lot more fun. And while some people may have the time, space or inclination to fashion their own aerial runway or build a network of treehouses, I’m not one of them. So, I’m pleased that Wow Park has this taken care of. On our way home I ask my son for his review. A fierce critic who is not known for mincing his words (he recently described my lasagne as “diabolical”), he responds simply: “Best. Day. Ever.”

Helen Russell is author of The Year of Living Danishly. Her latest book, The Atlas of Happiness, is available now

Ryan Lochte on How He's Getting Ready for the 2021 Olympics