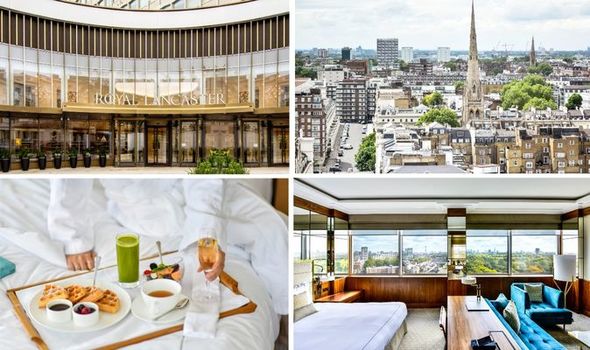 I wasn’t just checking into any hotel – the five star Royal Lancaster is an establishment that towers over Hyde Park and as such has the most wonderful, panoramic views. Our highly luxurious corner suite afforded a spectacular vista not just of the famous park but also of the entire city of London. To my left was the Shard, Canary Wharf and the London Eye and to my right, Westminster Abbey, the Royal Albert Hall, Battersea Power Station and beyond.

It was practically tourist landmark bingo as I stared out of the window in astonishment and by window I mean, the two thirds of the wall that wrapped around the suite which were entirely made of glass.

The effect was further improved thanks to the strategically placed mirrors; at no point did you lose the panoramic view – the London Eye really did watch you.

It even fixed me with its stare in the bathroom… which brings to me to my second favourite thing about my suite at the Royal Lancaster Hotel.

It also boasts a Japanese toilet. 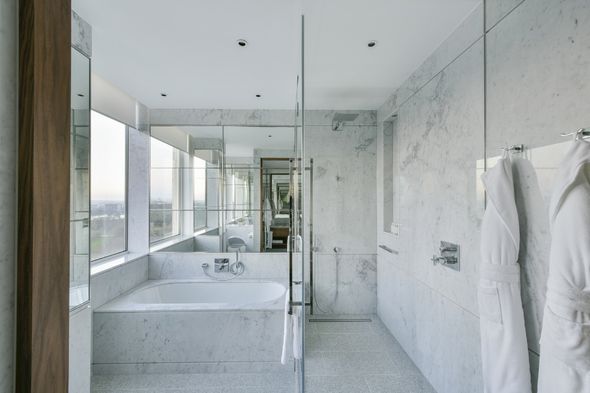 Which is how I found myself laughing hysterically alone in the loo as jets of warm water squirted up at me before warm air was expelled.

Yes, the glass of champagne I’d been offered on arrival may have heightened my initial enjoyment here, but the term ‘royal flush’ has never felt so apt.

What’s more, as you relieve yourself, you can see stretching below the Italian gardens, treetops and verdant landscape of the Grade I-listed Royal Park.

In fact, there’s no denying I’ve been disappointed by every toilet visit since.

As for the rest of the room, I luxuriated in the enormity of the very comfortable king size bed.

Indeed it was so big that if I stretched my arm out I couldn’t even feel my boyfriend (which might be arguably either good or bad news for couples.)

The 893 square feet suite was also home to a 65-inch Smart TV which, quite frankly, was the biggest telly I’ver ever seen. This is the place to tune into your movie crush. Leonardo, where are you?

There were plenty of news channels to watch as well as BBC iPlayer, but sadly I couldn’t find any separate free films.

We also benefited from a large dining room table, which in fact turned out to be just the ticket as in-room dining is currently the norm at the Royal Lancaster. 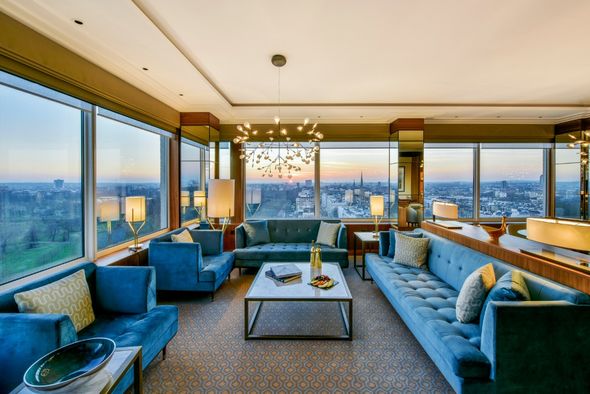 For now, the restaurants remain closed at the property – which only opened at the end of August – as the hotel adapts to the new normal.

Dining is still an option in the hotel’s bar area, but with such limited occupancy (only 30 percent during my weekend stay) it felt rather empty.

Therefore, this is the time to really make the most of room service.

Both breakfast and dinner are brought to our rooms – with the menus accessed via a QR code.

In the evening, our kindly waiter comes in and set the table, complete with white tablecloth and polite enquiries about our stay as he lays out our repast.

Guests must be warned that the food selection is currently very limited indeed.

Two starters, a handful of mains and three desserts are all that’s really on offer for lunch and dinner. 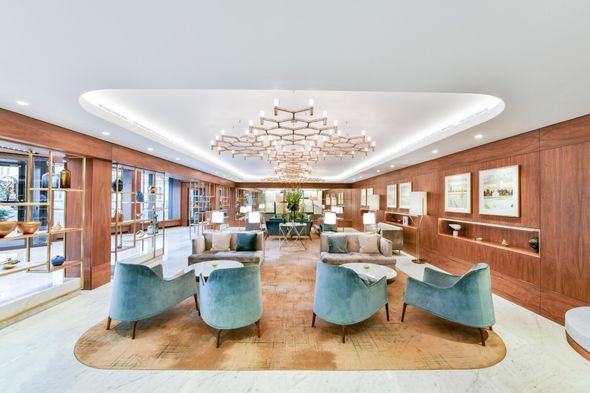 I recommend sticking to just the breakfast (all the classics are on offer and vey nicely done) and branching out into the city itself for other meals, as, while my steak was delicious, the food is the hotel’s weakest area for now in my opinion.

London is home to some simply fantastic restaurants, most of which seem to be open now (although booking is best) and some are continuing the 50 percent off food offer introduced in the government’s Eat Out to Help Out scheme – so it would be a shame to stay in.

The Royal Lancaster undeniably has some teething problems to work through as it returns to operation.

But the well-dressed staff are incredibly genial and quite clearly thrilled to be back in business.

I’m told the very first guest at the hotel after lockdown was greeted with a round of applause they were so excited to get going again.

I can’t promise you the clapping, but go for the views and stay for the toilet. You won’t be disappointed.

Royal Lancaster London offers nightly rates from £199.00 based on two sharing a Deluxe room on a room only basis.

The hotel currently has the following offer available:

Valid from Thursday to Sunday until 31st October 2020

Prices start from £199 inc VAT for a Deluxe room

Offering free cancellation until 2pm on the day of arrival in case travel plans change, for peace of mind when booking