The coronavirus pandemic has thrown the airline industry for a loop, as carriers around the globe rethink their routes, services and business plans.

For Aeromexico, a bankruptcy filing in the United States may have been its most headline-grabbing move this summer, but it’s just one part of the company’s strategy to reposition for success in the coming months.

With no government assistance, Aeromexico quickly mobilized to develop a comprehensive response to the coronavirus pandemic, while relaunching flights that it had suspended during the height of the global crisis — all without the need to resort to layoffs.

After upping its number of flights by 20 percent between July and August, service continues to increase, according to Marc André Ourgant Fernández, communication and crisis manager at Aeromexico. “For August we had 7,300 flights and for September we should finish the month with 7,600 flights,” he said.

The latest route additions are domestic, Ourgant noted, including new flights from Guadalajara to Cancun and Los Cabos, as well as a return of service to Acapulco from Mexico City.

In addition to its already existing service to the United States, Aeromexico is also scheduled to return to Dallas/Fort Worth on September 30. Several other international routes are pending a relaunch, including flights to Tokyo, London, Bogota, Buenos Aires, Santiago de Chile and Lima, all of which are slated to return to the carrier’s route map on September 30.

Pandemic-related government regulations are a deciding factor for restarting international service, according to Ourgant, since the airline obviously can’t fly to nations that aren’t currently allowing new flights.

“It depends on the restrictions that all the governments have,” he explained. “We were planning on having the routes to Buenos Aires, Lima and Ecuador from Mexico City [earlier], but we had to postpone that until September because they moved the restrictions. So it all depends on them. If they want to change it again until October, we need to change our flight schedules.”

While Aeromexico has grounded 19 of its aircraft during the bankruptcy process, it’s still operating all four aircraft types in its fleet, including the Boeing 787 Dreamliner, Boeing 737-800 and two types of Embraer regional aircraft.

The airline is already making room for more flights at its main hub at Mexico City’s Benito Juarez International Airport, as final touches are wrapped up on a new concourse with seven new gates in terminal two. Just a few yards away, Aeromexico’s Salon Premier VIP lounge recently reopened. 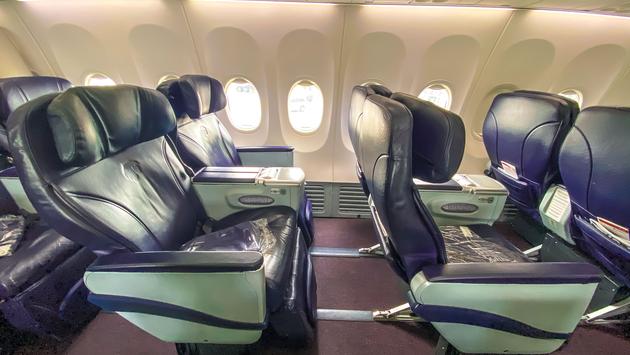 The airline industry’s pandemic-inspired approaches to everything from booking changes to inflight sanitation have garnered lots of attention, and Aeromexico is no exception.

Among its newest passenger-friendly booking policies is a “flexibility waiver” that allows one free ticket change or a voucher for 115 percent of the original ticket value for tickets purchased on or after July 1, 2020.

The carrier’s safety and hygiene protocol, meanwhile, includes aircraft cabin disinfection, HEPA filters aboard all aircraft and mandatory face masks for all staff and passengers. In addition, flight attendants offer hand sanitizer to passengers during the boarding process and inflight snack and beverage service is limited to prewrapped items.

On the ground, travelers passing through any airport in Mexico are subject to extensive health screening, regardless of airline — including a “risk factor identification” questionnaire that can be accessed via a QR code near the security area in all passenger terminals. Health officials also take the temperature of arriving and departing airline passengers in Mexico (those arriving may not even realize they’ve had their temperature taken, since it’s done via thermal imaging scanners, generally as travelers walk away from immigration desks).

In addition, passengers now board Aeromexico flights from the back of the plane first (with the exception of business class passengers), to prevent crowding in the aisle and promote social distancing. Upon landing, deplaning is by row as well, and cabin crew request that passengers remain seated until their row is called.

Aeromexico’s partnership with Delta Air Lines will continue to play an important role in the company’s growth strategy, according to Ourgant, even as Delta’s participation as a shareholder in the Mexican airline changes as a result of bankruptcy restructuring.

“The commercial relationship is still the same,” he said. “The only thing that’s changing is the cash participation in Aeromexico. They have 49 percent of the company; through the chapter 11 process that’s going to change. But our commercial relationship with Delta stays the same. We’re still operating in the Mexico and U.S. markets as one airline.”

Educating and working with the travel agency community is also crucial for Aeromexico’s success, he added. “We do a lot of webinars, conversations and video conferences and now we’re trying to have calls with different tourism offices in Mexico — Los Cabos, Cancun and any other destination where we fly, so travel agents will know all the news we have for those destinations.” The airline is also partnering with hoteliers like Grupo Posadas, which owns brands including Fiesta Americana, Fiesta Inn and Live Aqua, to reach more travelers through the media and travel agency education.