‘Are you a crew member?” the security guard asked, fixing me with a stare in the van’s rear-view mirror. “Passenger,” I replied. The guard gave me a quizzical look then muttered something to himself in German, shaking his head. It was 7am and the port of Hamburg was a hive of activity, our port security van speeding past whirring cranes and towering stacks of shipping containers. As the ship’s immense hull came into view, I entered a world where everything was larger, louder and more dangerous than my life on land. The 300-metre, 100,000-tonne vessel before me was to be my home for the next 15 days.

Four months earlier I had made a reservation on a cargo ship to take me from Hamburg to Halifax, Nova Scotia. My European work visa was expiring and I hoped to make it home to the west coast of Canada in time for Christmas. Recent campaigns such as the Swedish flygskam (flight shame) had shone a harsh light on my blindness to the climate impact of air travel, and I had decided that booking a flight wasn’t an option. Since 2017, I’d emitted over 14 tonnes of carbon from flights alone. I realised that all my efforts to reduce my carbon footprint at home in Milan – I cycle to work, limit food waste and seldom buy new clothes – are wiped out by just one flight between Canada and Europe. 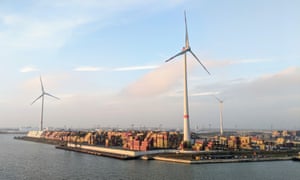 Sustainable travel within Europe often involves trading a plane for a train, but getting to Canada from Europe is more complex. A cargo ship became the obvious low-carbon choice. Shipping companies sell surplus cabin space through selected travel agents and I booked my passage through Berlin-based Slowtravel Experience. This is still a niche mode of travel and ships rarely have room for more than a dozen passengers, so booking well in advance, especially for peak times, is essential. Flexibility with travel dates is also crucial. I was notified just days before departure that the ship would be leaving three days ahead of schedule, and had I not already been in Germany, I would have literally missed the boat.

What’s the carbon footprint of my trip?

I anticipated a long and tiresome journey (I packed dozens of books and downloaded films) and had visions of gruelling nights spent with my face in a barf bag, but my experience on board could not have been more enjoyable. The two other passengers, Tony from the Netherlands and Janos from Germany, were hitching a ride for the same environmental reasons and their company made time fly by. Our cabins were simple and comfortable, each with private toilet and shower, two single beds, a desk and vast ocean views. The 25 crew members, a mix of Filipino and eastern European men, were warm and friendly. I was in all-male company for my transatlantic voyage but Isabel Hagen, a Swedish student I met through a friend, made the voyage earlier this year, and said she’d had a positive experience as a solo female traveller: “The crew was welcoming, respectful, and polite from the moment I stepped on board.” 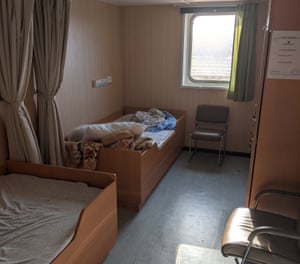 Left mostly to our own devices, Janos, Tony and I filled our days with darts tournaments, jigsaw puzzles and raucous games of Risk. One morning we played chess on a deck bathed in sunshine; the next afternoon Tony lost his knitted cap to hurricane-force winds off Newfoundland. During port calls in Antwerp and Liverpool, we were allowed to disembark and explore both for a day. Back on board, a daily routine quickly emerged: morning coffee on the bridge with the gregarious chief officer, sociable mealtimes with the crew, and hourly strolls around the outer decks, the frigid ocean wind buffeting my face and dark waters churning below.

A highlight was a morning’s tour of the ship, led by crew members. Passenger access to working spaces was restricted, so the chance to walk through the bowels of the ship from bow to stern was eye-opening. In addition to nearly 4,000 containers stacked on the exterior decks, there were six “roll-on, roll-off” decks carrying vehicles, ranging from a fleet of Range Rovers and transport trucks for the US army to an aeroplane fuselage. As the captain explained, the complexities of the enormous operation, I marvelled at the sheer scale of everything around us, an industry responsible for transporting 90% of goods worldwide. 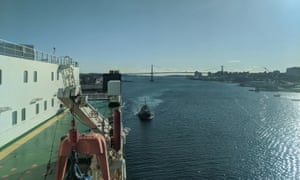 Life on board was so immersive that after a few days I didn’t even mind the food. Passengers dine with the crew, and meals are meat- and starch-heavy, with few vegetables (think beef stew and mash or bacon-wrapped chicken portions). As I soon came to understand, the luxury of being at sea is not about fine food or a plush mattress; rather, life at sea itself – the tranquil pace and intoxicating sense of adventure – is the true luxury. When I finally set foot on dry land in Halifax, it was hard to say goodbye to the hulking ship that had come to feel like home.

Where to go on holiday in 2020: the alternative hotlist

Arriving in Halifax, I still had more than 6,000km to go to get home (further than London to New York), this time by train. With limited passenger rail infrastructure, a cross-country trip in Canada means a halting, week-long adventure rather than high-speed rail jaunt. There’s no single coast-to-coast train, so after an overnight train from Halifax I spent a night each in Montreal and Toronto before boarding The Canadian, VIA Rail’s flagship sleeper train to Vancouver. Designed for tourists, it has a charming dining car, glass-domed observation decks, live music and even wine tastings during the four-night trip. 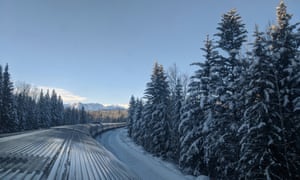 As on the ship I was immediately struck by the hospitality of the crew – servers and attendants who seemed genuinely happy to be there despite being thousands of kilometres from home. The food was impressive as well, like the brunches of fluffy buttermilk pancakes drowning in the maple syrup that I’d missed so much in Europe. Dinners of hemp-crusted trout, roast veal chops and fresh vegetables were equally delicious. The atmosphere among passengers was jovial, with communal mealtimes and a rowdy bar where we swapped travel stories.

As on the ship, the vast expanses passing by my window made the journey special: the endless boreal forests of northern Ontario, the icy, placid prairies and the magnificent Rockies in the west, every landscape shimmering under mid-December snow. Sitting in the dome car watching a blazing sun set over white Quebec forests and waking to whiteout blizzards in Manitoba deepened my connection to the land I call home, and reaffirmed my commitment to protecting this natural beauty. 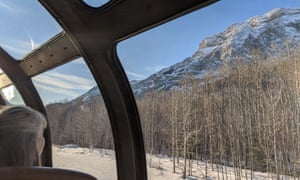 Stepping off the train in Vancouver, having travelled more than 13,000km and crossed nine timezones, that van ride at dawn through the dreary port of Hamburg felt like a lifetime ago. World travel with a low carbon footprint may not be convenient or easy, but I had proved to myself that it is achievable. Now it’s time to plan my next adventure.

The 15-day cargo ship passage from Hamburg to Halifax, booked through Berlin-based Slowtravel Experience, costs just under €100 a day (including full-board and carbon offset) in a two-person cabin. The best-known shipping companies offering passenger berths include Hamburg Süd and Grimaldi Lines. Other agencies to look at are New Zealand Freighter Travel, London-based Cruise People, and Maris Freighter Cruises. Train travel was provided by VIA Rail Canada. The Ocean travels from Halifax to Montreal three times a week from £68 (C$117) one way, daily trains from Montreal to Toronto from £22 one-way and The Canadian, from Toronto to Vancouver twice weekly from £271 one-way.

Carbon emissions (according to weight of passenger)

Looking for a holiday with a difference? Browse Guardian Holidays to see a range of fantastic trips